The creation of this medical institution was facilitated by a personal tragedy in the family of the founders – a couple of Robert and Gloria Drummond. In the distant 1962 year two children of the couple were poisoned and, if the nearest hospital were nearby, they could be saved. In memory of the children, the parents decided to build a hospital in Boca Raton. They founded a fund where everyone could donate money to a new hospital in the district and, in 1967, The Miracle on Meadows Road opened the doors for its first patients. At first, the hospital had only 107 beds, now there are more than 400 of them. The hospital received its modern name in 2010, when it was renamed the Boca Raton Regional Hospital. 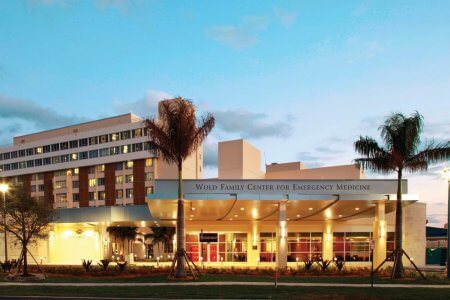 Now 800 first-class professional doctors and more than 2,000 personnel work in this medical institution. The hospital is known for its special department – Women’s Institute, which explores new methods of treating purely female diseases and medical problems.

The maternity ward of the hospital is 12 perfectly equipped cozy and comfortable chambers, next to which in the hospital there is a department of children’s resuscitation (NICU Level II).

In the hospital, future mothers can go through all kinds of courses and practices for caring for the child.